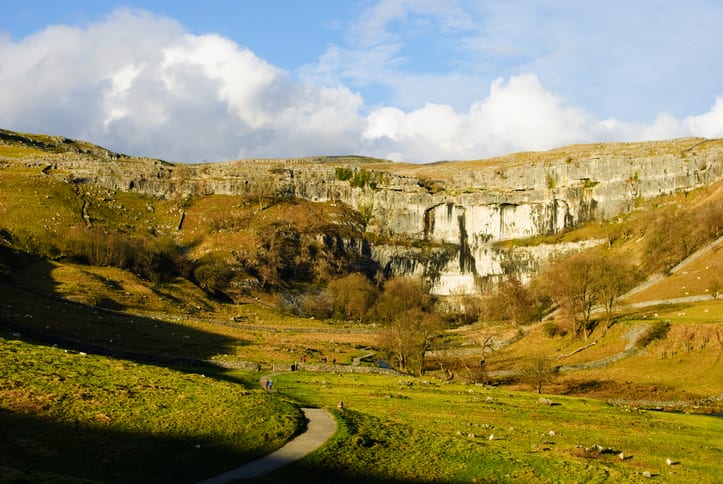 “I won’t know for sure if Malhamdale is the finest place there is until I have died and seen heaven (assuming they let me at least have a glance), but until that day comes, it will certainly do.” Bill Bryson.

Malham Cove is a spectacular 80 metre high natural limestone formation which comprises a curving amphitheatre cliff at the head of a valley and is one of the most popular natural features to be found in the Yorkshire Dales.

Situated, 0.5 mile north of the village of Malham in North Yorkshire, the imposing height of Malham Cove is perhaps its most impressive feature, however it is also famous for its limestone pavement above. The limestone pavement is thought to be one of the UK’s most notable examples of later karst weathering. It is rather like walking across a moonscape and is definitely not to be missed. Take care when it’s wet though, that limestone can get slippy.

The cove was formed more than 12,000 years ago by a large ice age river that once flowed down the  valley above the cove. Meltwater, particularly from Malham Tarn, plunged over the lip of the cove in what would have been a spectacular waterfall, this erosion took place more actively at the lip of the fall, hence the curved shape. Only after severe amounts of rain, such as after Storm Desmond in 2015, does Malham Cove temporarily turn back into a waterfall. 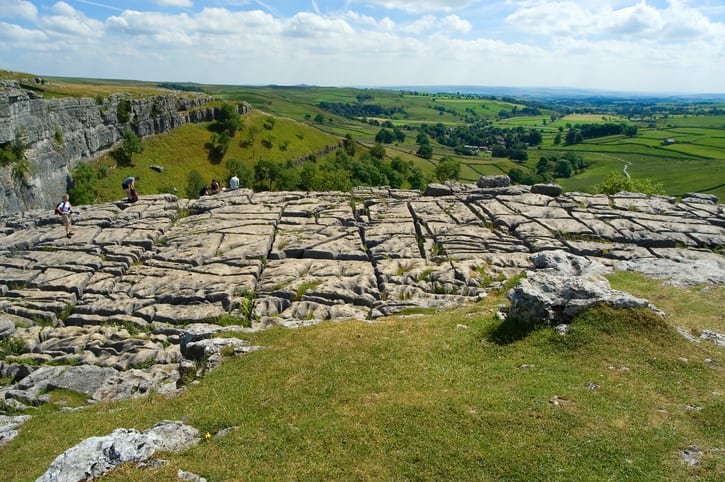 The landscape will also be of interest to bird lovers, as it is home to both Peregrine Falcons and Tawny Owls. Peregrine falcons, one of Britain’s most impressive birds of prey, have nested at Malham Cove since 1933 and the Royal Society for the Protection of Birds (RSPB) and the Yorkshire Dales National Park Authority operate a viewpoint from where the birds can be seen.

Malham Cove has also been immortalised on the big screen. Scenes for Harry Potter and The Deathly Hollows were filmed all around Malham including Malham Cove, the limestone pavement, Malham Tarn and Gordale Scar.

As a Yorkshire woman Malham Cove holds a special place in my heart and I thoroughly recommend a visit to this wonderful example of natural Britain.