June in The Blackberry Garden

I find June can be a funny month in the garden, it follows May which someone described to me as ‘it May rain, it May be sunny, it May hail’ very apt for this year in particular. After having such a cold dry April, the rainy breezy May will hopefully lead to a lush growth-spurting June. 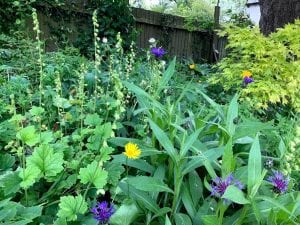 In the garden the sweets are climbing upwards. I sow mine from January onwards, successionally sowing that I will hopefully have some in flower still at the first frosts. I have planted out the first batch and they are doing well. So far the slugs have held off but I have nematodes at the ready for when they start to advance.

In the vegetable borders I have lots of brassicas this year. I love purple sprouting broccoli which does have a long growing season, but I think it is worth devoting the space to. It tastes amazing and I find it a courteous vegetable: it does not glut, it does not tend to bolt but you do have to watch for slugs in the early days. 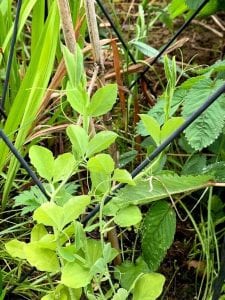 I am also growing broad beans for the first time this year for quite a while. I like them, but I do not always love them. A break has been good for us both. In the greenhouse the first buds are appearing on the pepper plants. Always an exciting moment!

In the flower borders the mixed economy that makes up the informal cottage style for much of my garden is starting to knit together well now. The Astrantias, an important building block of my borders that repeat themselves throughout, are getting ready to flower.

These sedums ‘acquired’ from a broken stem from the border outside the office I used to work at and now propagated into several plants also repeat themselves along the border. These sedums flower late in the summer/early autumn so at this time of year are green, nicely formed foliage, mounds. They are currently full of promise. 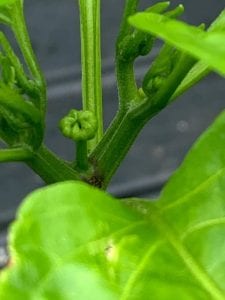 I have over the years added more shrubs into my borders. This Euphorbia meliffera was grown from seed and quickly becomes a largish shrub. This year it has blown my socks off with the most strong honey scent I have ever known from it. I know the clue was in its name, but never has it proven itself as much as it has this year. Whilst it does get large it is also easy to cut back in early autumn. If you have space for one then grow it, but I would place it at the rear of any border. The sap can be an irritant so you do not want to have broken stems by something like a stray football which results in someone getting some sap on them. 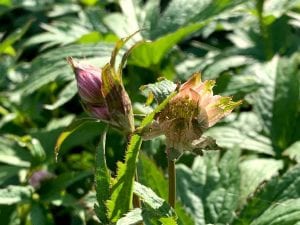 June seems an inbetweener month, the Spring flowers are over the Summer ones are thinking about making a go of it. The grass grows fast and the everything feels like it is moving forwards and upwards. It is a time to enjoy and keep on top of the weeding; so enjoy your June in the garden.