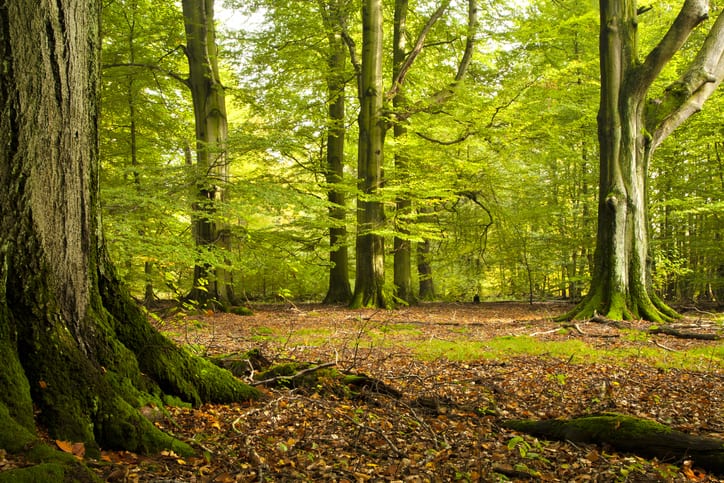 The Celtic Tree Calendar is a really simple and charming idea, just like the signs of the Zodiac the tree calendar spans across different months and is aligned to the cycles of the moon. Although it sounds ancient, the modern tree calendar is not based on a Celtic calendar, but does have origins in the old Celtic alphabet where each letter was said to correspond to a tree

Regardless of it’s origins, it’s a wonderful way of us connecting with the natural world around us and recognising the importance that trees have in our culture and environment.

Also known as the lady of the woods, the elegant birch tree looks it’s best in the Winter months. Following the passing of the Winter solstice, it’s a time for rebirth and regeneration.

In Scotland, Rowans are often planted at the front of houses as they are known for their powers of keeping evil spirits at bay, once planted a Rowan should not be moved. They are associated with Brighid the Celtic goddess of hearth and home and protecting mothers and families.

The ash is one of our largest native trees and produces ‘keys’ which spiral gently to the ground. In British folklore the ash was credited with a range of protective and healing properties with most of these related to child health. Similarly the Celts gave the tree the name of “Cradle of Life”. Ash is also a great firewood, burning for a long time with an intense heat, whether seasoned or green.

Alder represent strength and has both male and female catkins on the same branch. The alder is a member of the birch family and is generally found near streams, rivers, lakes and wetlands and as such, its wood is very strong and durable under water. Alder is a nitrogen fixing tree and it’s ability to fertilise even the poorest soils has been used for millennia.

This is a tree associated with healing, growth, knowledge and nurturing. Willows thrive close to water or a damp environment and have many uses, willow weaving is enjoying a resurgence. The sound that willows make in the breeze is meant to be elves whispering in the branches as people walked underneath.

The Hawthorn is a welcome addition to many country hedgerows and has an abundance of beautiful blossoms. It was called ‘Huath’ by the ancient Celts, and represents a time of fertility. It was believed that bringing Hawthorne into your house invites bad luck. Each flower produces a fruit, called a ‘Haw’ which ripen in October and resemble small bright red apples and are loved by our birds.

The Oak is often the tallest, oldest and strongest tree in the forest, and as such, have been revered and worshiped by many cultures throughout the ages. The wood is renowned for it’s strength and durability and carrying an acorn in your pocket is meant to bring good luck.

This evergreen plant reminds us all year long about the immortality of nature, and Celtic chiefs would wear crowns made from holly. Hanging a sprig in your house is meant to ensure good luck and safety to your family, and holly trees were often planted near dwellings to protect people from lightening strikes.

Hazel has long been the wood of choice to make walking sticks and is thought to represent knowledge, uniqueness and intuition. There are a number of variations of an ancient tale; nine hazel trees grew around a sacred pool, as their nuts dropped into the water they were eaten by the salmon (a fish revered by Druids) which became became wiser and wiser. The number of bright spots on the salmon were said to indicate how many nuts they had eaten.

The vine was extremely important in ancient folklore because of the grape, and wine has been made for thousands of years. The vine represents harvest time, thanksgiving and the beginning of Autumn. It’s known as the tree of joy, exhilaration and wrath and is believed to represent strength, endurance and determination.

Ivy is often used at weddings where is symbolises fertility, and at Christmas the evergreen holly and ivy come together giving much needed greenery at this time of the year. Ivy has long been associated with wine, and historically English taverns had the signs of an ivy bush over their doors hence the saying ‘Good wine needs no bush’.

The reed represents adaptability and being to bend with circumstances rather than break. Whilst not a tree, to the early people of Britain it was an extremely important component for warm, dry homes. Reeds have provided material for roof thatching, arrow shafts, musical instruments, and many other domestic items. These plants are associated with health and healing, knowledge and learning.

Known as the poor mans medicine chest, the Elder has many healing properties. The branches contain a pithy core which make it the wood of choice for the making of whistles, pipes and other musical instruments. There are many references in folklore advising against sleeping under an elder and this may be due to the the strong smell of the leaves which is known to repel flies. Like the Rowan and the Aspen, the Elder is seen as a protective tree and growing it at your back door is meant to deter evil spirits from entering the home.

We use cookies to ensure that we give you the best experience on our website. If you continue to use this site we will assume that you are happy with it.OkPrivacy policy