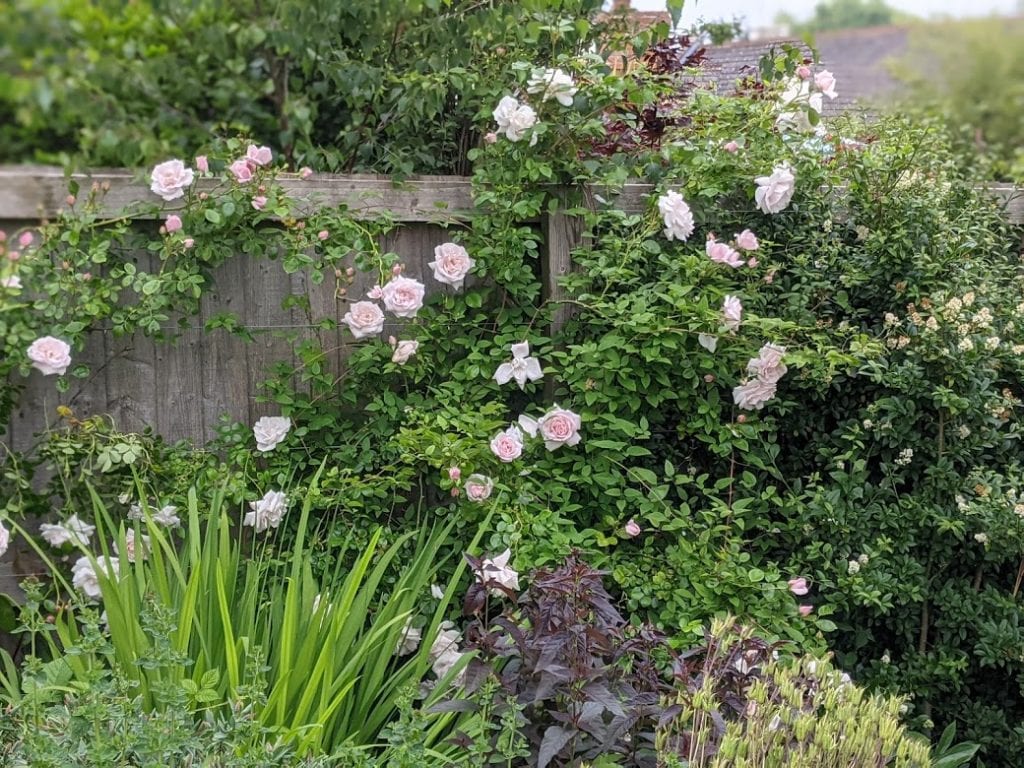 At last the weather has warmed up and the threat of frost seems like a distant memory, this means that gardeners across the country could spring into action and start planting out!

The contents of our homemade cold frame had spilled over into our kitchen, so the increase in temperature was a relief all round!

Our sugar snap peas have germinated and are growing well, I have continued to plant out more rows with the final one going in last week.  Unlike last year we haven’t had to tie anything in, they seem to have found their own way upwards. 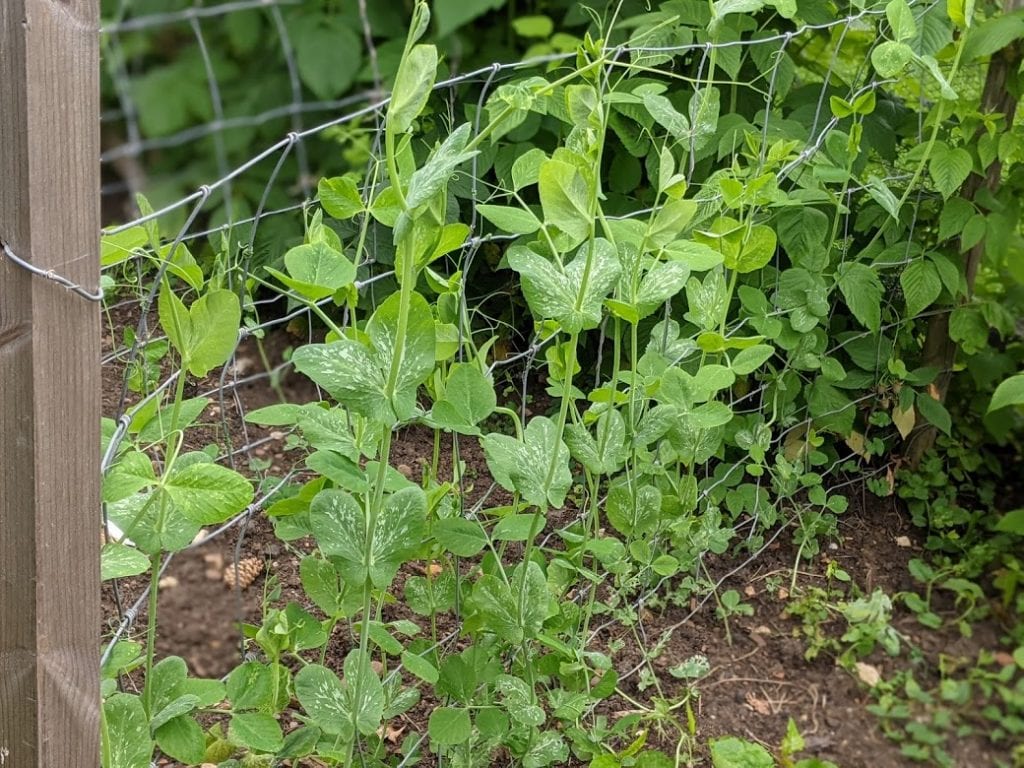 I am always very enthusiastic and plant things too close together, our spreading rhubarb plant was obscuring a gooseberry that I had planted.  Thankfully, we managed to give some more away to an elderly neighbour who was delighted with the gift – it was destined for a crumble.  This is a good lesson, although plants start small, they will grow (or that’s the idea…) and they need space to flourish.  All too often I find myself having to dig things up and move them to a more spacious spot – I need to learn to be more patient.

As the veg was planted out, our palette cold frame changed to the home of my tomatoes.  I mentioned in last month’s article that I had chosen the tumbling tomatoes ‘Red Profusion’ and I had calculated the cold frame could house four plants.  Well they have grown larger than expected and I am now struggling to house them.  But, for the first time ever, I am hopeful that we will have tomatoes that we can eat.  I am feeding them once a week and keeping the soil moist, I am being restrained and making sure I am not over watering.  I have followed the instructions to use 30cm pots and they are working well.  Remember with bush tomatoes you don’t pinch out the side shoots.

Our additional wooden cold frame from Aldi, houses one tomato (just) and lots of basil and our chili plants.  Something strange happened to the chilis and their leaves started to curl, they don’t look right to me but we’ll see what happens – I haven’t written them off quite yet.

The sunflowers, over 60 of them, were collected by people from the village and are now part of our competition.  Read the full article here.

Our unknown raspberry varieties are also doing very well.  There are numerous signs of fruit and they have grown so high that they are poking out of the top of the veg patch net.

Perhaps the most excitement we have had so far, was when we found our first ever strawberry.  I had only planted them out a couple of weeks before and we were taken by surprise when we saw it. It was fab.  My daughter and I shared it. 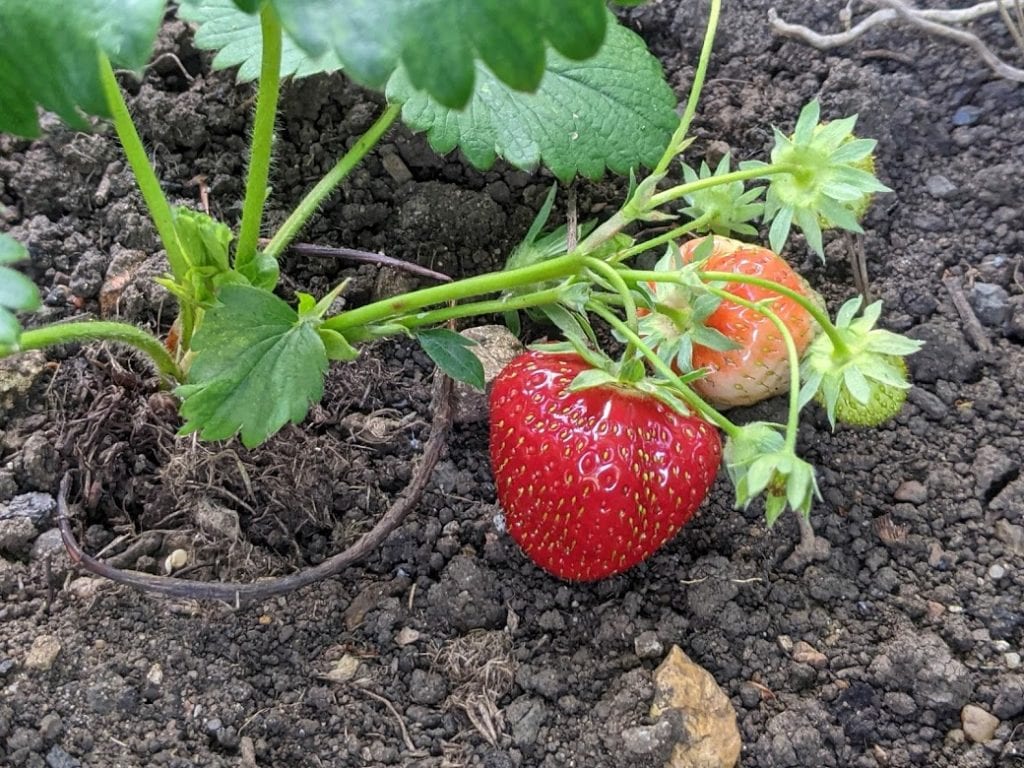 I have a large aluminium tub, which was rescued from a skip last year.  I have been enjoyed the winter pansies so much that I delayed planting out our salad until a week into June.  Its sprouting now but will be a while until we can eat anything.  Must remember this for next year, at least we have basil! 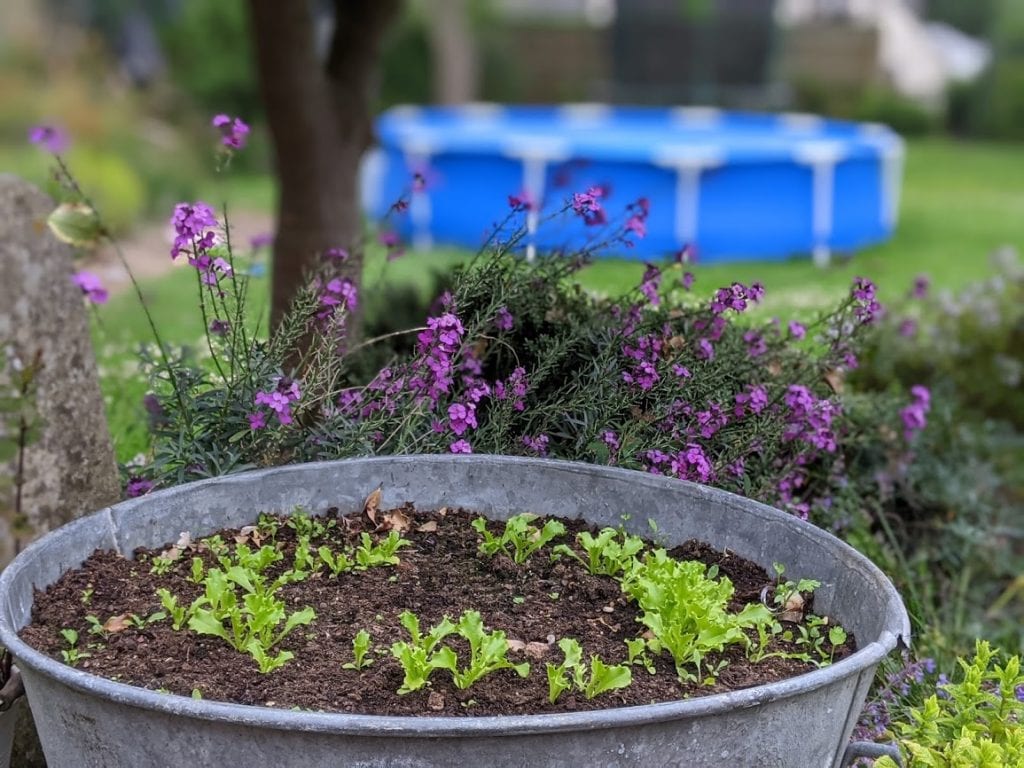 Our allotment is now fully planted with only one space remaining.

We took some raspberry runners from the garden veg patch and planted them up.  Unfortunately and very annoyingly we didn’t water them enough and they didn’t make it.

The sweet peas are going for it.  I was worried about the corn as we planted them in the toilet rolls too early – since planting out, they seem to have rallied and are looking strong.

After saying in last month’s update that we wouldn’t be planting beans, I ended up buying a tray of French beans from a seller in a local village.  They’re still quite small and I’m still waiting for them to make a bid for the top of the canes.

The gooseberries are thriving and so is one of the currants.  However something strange happened to the other current, every time we visited it there was more signed of some kind of infestation.  I cut it back to the ground and will wait to see what happens. 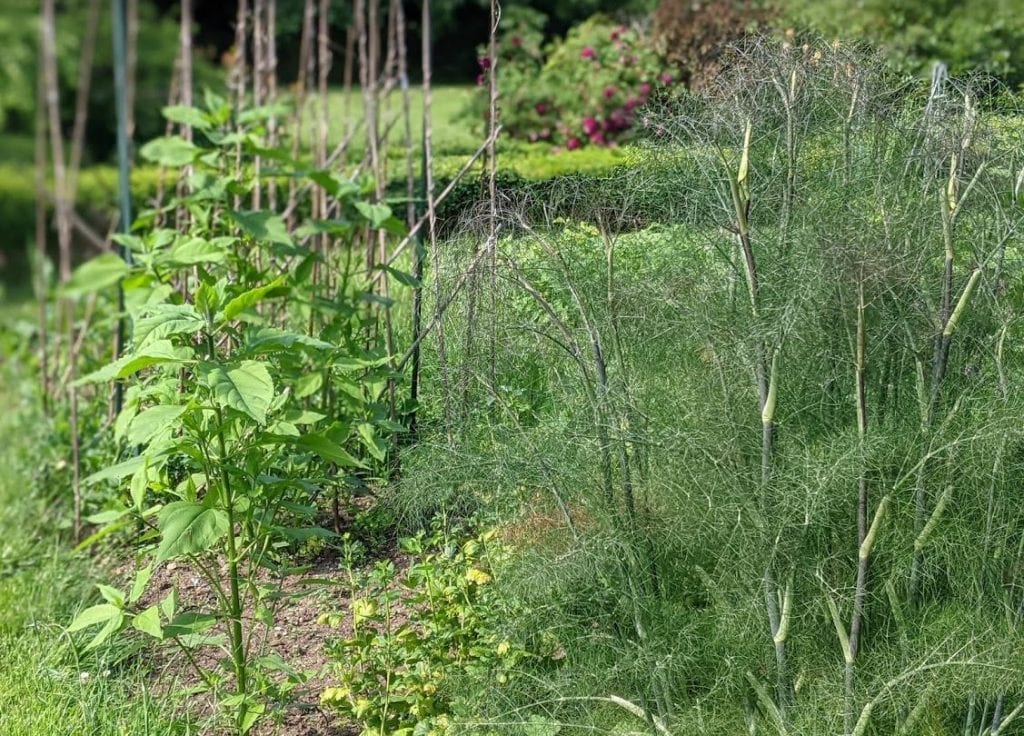 The fennel is taking over and looks wonderful with its feathery blueish green foliage and yellow flowers.

The glut of courgettes that everyone talks about, seems a long way off, and I would say our plants are looking quite mediocre.  Can we be the only ones not to be overrun with courgettes!!!!

Last month I did an update on our herb trough, but nothing much has changed there.  So I thought I would include my favourite garden flowers that are in bloom.

I need to start with peonies.  After my husband’s grandmother passed away and her house went on the market, I dug up some of her beloved plants to ensure that they remained with us.  I have nurtured these peonies but although they have produced plenty of foliage there was never anything more.  That was until this year.  The one bloom may have been on its own but it was perfect. 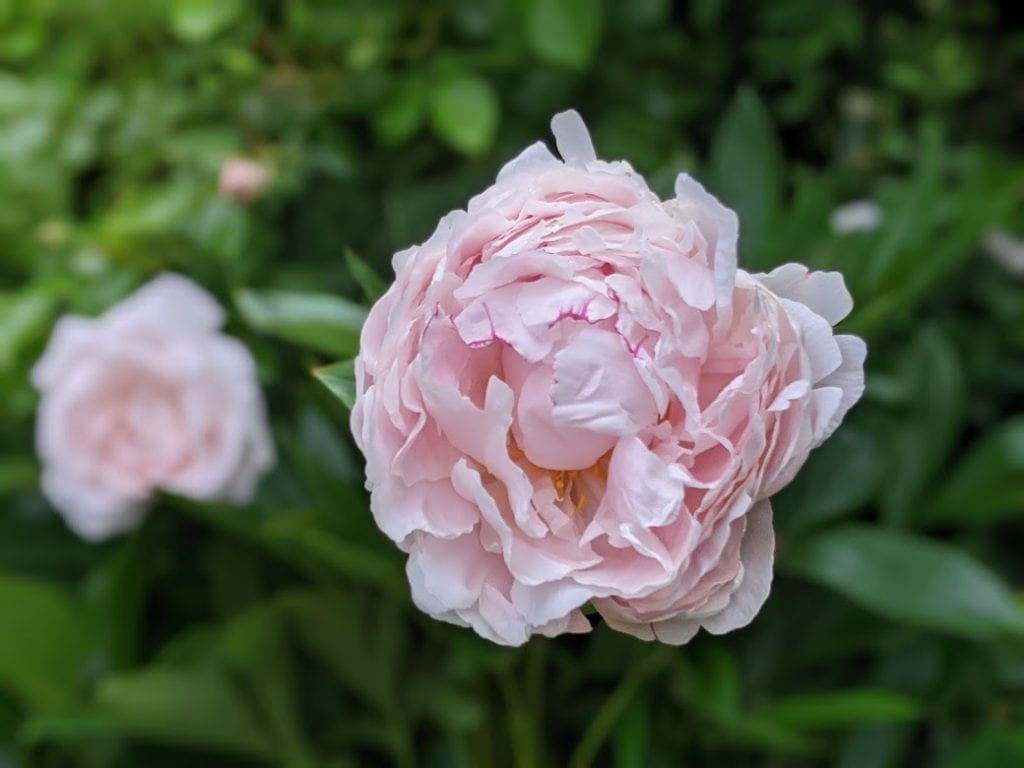 We have lots of fence to cover and at last our roses (like everyone else’s) are really going for it.  I’m vigilant about deadheading to ensure the display lasts as long as possible.  The honeysuckle and clematis (not sure of the plural!) which were bought from Morrisons supermarket for £2, are also doing well.  It almost looks like I knew what I was doing when I planted them!! We used the last of our primulas to make edible flower biscuits, you can find the recipe here.  The pink geranium has taken over the bench – I can’t bring myself to cut it back, we’ll just have to find somewhere else to sit!

One should not covet another man’s aeonium…. my two beloved beauties died in the frost – they had actually been taken as cuttings (from the one in this photo) and I was very proud of them.  I am now feeding the cat for the neighbours who own the original aeonium – I have ten days to decide whether I should take some secateurs with me!!!! 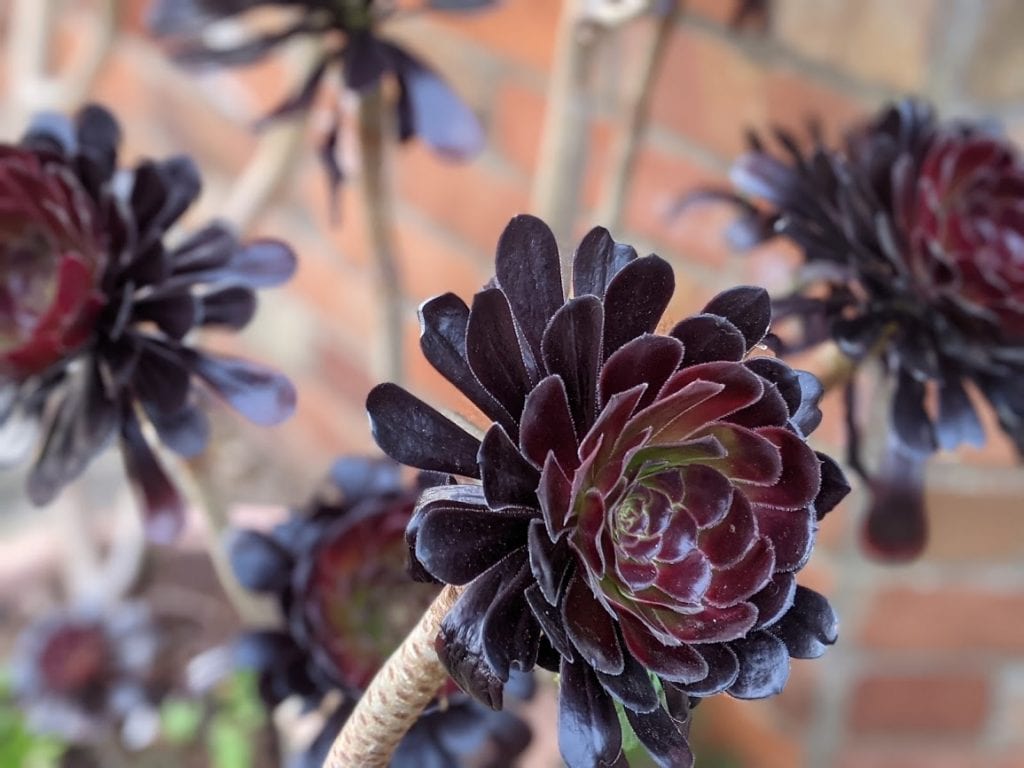 Wishing you and your garden a warm, but not too dry, July!

Thank you for reading and come back soon for an update.